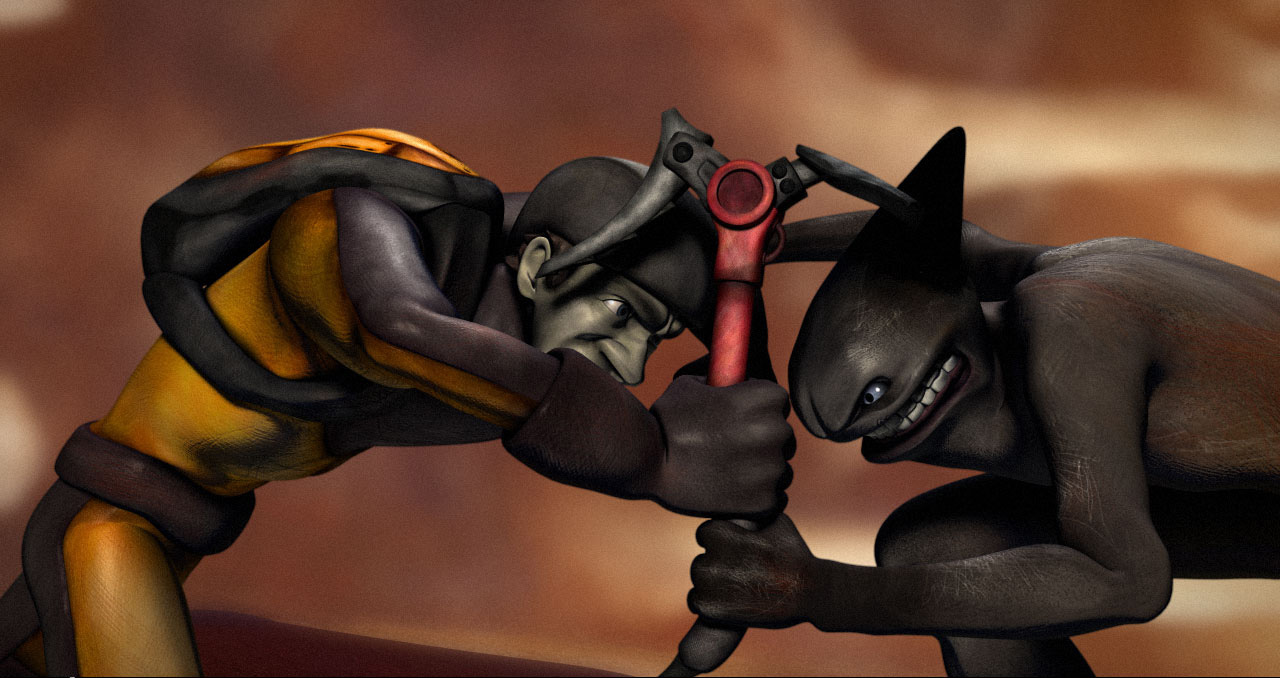 In 2008 I decided to transition from Character Animation to Motion Graphics right about the same time when I transitioned from Post-production to Game Development. Having studied Animation my goal was to work in the Films Industry but eventually I changed my mind and I took a different path. It was a difficult decision but I believe that it was the right one. In this post I want to share my personal journey into and out of the Animation world and how I tried to maintain my identity as an artist despite having different goals through the years.

During my university years I was inspired by the potential of the new technologies. Works by Animators such as Tomasz Bagiński or Bill Plympton where proof for me that Animation could be a medium to express myself as an artist. During my second year into pursuing my BA I had the opportunity to collaborate with the graduating class with their final project. Although I was mainly involved as Visual Designer and Texture Artist by the end of the project I contributed with models and animations for the short film Cincompasión (Fig. 1).

After that experience I decided to pursue my career as an Animator. I gained experience and I studied further. My opportunity came some years later when I got a job in London as a 3D Animator in a Post-production house, in Soho, right next door to world class studios like MPC or Framestore. What a dream! I felt that I was fulfilling my goal. But not quite there yet. One thing that I realized quickly was how fierce and tenacious the competition was (and still is) and just how dedicated you have to be in order to have a chance. But I was not going to give up and I decided to diversify my portfolio and gain more experience as Character Animator. I was mainly working in Advertisement but I thought that doing Games for a year or two might be a good idea. Once again I had my chance and I got a job in a games studio doing, among other things: Character Animation! I was clearly in the right path into my career as an Animator, but at the same time I felt somehow unsatisfied. For some reason I didn’t quite loved this Animation world as much as I thought I would. Quite a strange feeling.

The truth is that I love Animation for its storytelling possibilities and its beauty, much the same way that I love the paintings of Zdzisław Beksinski, but unfortunately I don’t quite like the process of doing the animation. I enjoy the result but not the process. My biggest frustration was that as an Animator you work with the RAW material all the time and not with the final output. Someone else has to add a lot of more elements into the scene for the image to be actually final: textures, backgrounds, lights, effects, etc (this is common for most studios but certainly it’s not a rule). With Motion Graphics, on the other hand, you work with the final image and you get to do animation too. What a perfect combo! At that point I decided to focus on Motion Graphics and not become a Character Animator.

In the following years I was working with Motion Graphics for video games and although I was also doing User Interface, I was producing quite a lot of 2D Animation. Up until that point I also had attempted several times to develop a personal project (a short film) but I never had the time to make any significant progress. The problem with Animation is that it’s very time consuming. If you want to create a project on your own you have to take care of everything: modeling, rigging, texturing, lighting, rendering, etc. You can easily spend an entire year working in one minute of animation (Fig. 2). In terms of storytelling there is just so much you can tell in one minute. That felt very frustrating and it led me to ask myself another question: What is my goal as an Artist?

It became clear that I had to leave animation all together and find another medium. Since I was already working with 2D static images as a UI Artist for games, I thought why not just go all the way and become an Illustrator? I was excited and I decided to pursue an MA in Illustration. For my final project I created a comic called Andean Sky. Using Illustration as my medium I felt that I was able to tell the story that I wanted to tell and develop it within a reasonable time frame and good quality. I love Illustration for the same reason that I love Animation, storytelling and beauty, but in this case I love the process too.

It took me this many years to complete this self-discovery journey and you might wonder if I wish I had done things differently: I do not regret the path that I took, I would not change one single thing. I love all the things that I learned because of Animation. I learned to accept myself as an artist. I feel stronger as an artist than ever before. I feel more true to myself than ever before. As much as I love Animation I understand that it’s not for me but I am extremely happy that it was part of my life.

If you are reading this post and you are an aspiring artist please do not feel discouraged by my words. If you want to become an Animator I say go for it; Animation is a lot of work but that didn’t stop Nina Paley to create a full feature film all by herself in Sita Sings the Blues. I do encourage you to be critical with yourself and be honest with yourself. I invite you to follow your dreams because even if you decide to change them you will grow in the process. If I had not decided to study Animation I would have regretted it for the rest of my life.